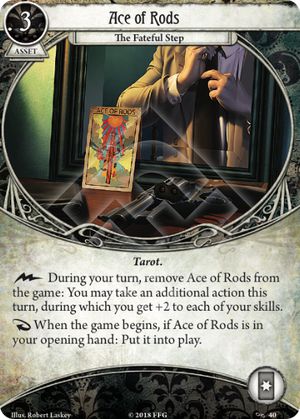 So I am thinking that maybe there is a character that goes under looked when considering the Ace of Rods and that is our friendly Pete.

So you lose your tarot slot but the survivor tarot is the most easily skipped so no great loss there.

If you don't draw it in your opening hand it can be fed to your dog like any other card so its lack of icons isn't as much a hindrance.

I also find myself flush with cash to burn in my dark horse pete decks so banking an action for 3 resources being the worst use of this card doesn't seem like a bad use of money I typically end up burning anyway.

The end of the day if it was good enough to include in every deck then it would probably be too good for a neutral 1xp card.

Zerogrim · 171
Yeah , it's in a funny niche in the card pool because it has to work as a SPOILERS pseudo story-asset for the Circle Undone as well. So, it's a tiny , mostly terrible, effect but if it were bigger or had more of an impact then it'd risk muddling up the balance of that campaign. I dunno if there's a solution to that.. — bee123 · 24 5/16/20
5

Did they forget to make this fast? It might have been worth considering if it was. As it stands, if this card isn't in your opening hand then most of the time you are effectively paying three resources to get +2 in a skill test, the equivalent of Unexpected Courage. Comparing it to the other neutral skill cards like Perception or Overpower is even more unfavorable because those allow you to draw a card if you succeed and are completely free. There are a handful of situations where the Ace of Rods will give you +4 in a test, but even then it is still too pricey to seriously consider.

One positive is that because it gets removed after use, putting two in your deck doesn't result in a dead draw. Preston Fairmont can use it as a means of flexing on other investigators to show how little he cares for efficiency.

DelightfulDilettante · 167
While all of what you said is correct, I don't entirely agree with your dismissal of the card. In addition to all of that, it lets you take an action *from* a turn where you have nothing important to do (because you wouldn't play this if you did), and move it *forward* to a turn when you need it (because you likely wouldn't use it unless you need it). Is it a great card? No. But action manipulation could come in handy in certain builds. — cb42 · 26 6/11/19
I agree that it's not a good card, but I feel some of the reason for that might be because it's in a fairly weird design nice. — bee123 · 24 6/11/19
*design niche. Like it's got to work as the neutral tarot card and as a kinda pseudo-story asset for the Circle Undone. So it's got to be balanced as a card in and of itself and as part of a campaign level risk/reward and that seems like a tricky card to get right. Like, it's got to be able to do something in most decks, but not outclass the class-specific tarot cards or end up OP in the specific context of the Circle Undone. Given all that I'm not surprised it ended up a bit too small of an effect. :) But I wonder what a balanced neutral tarot would be? Something like the Red-Gloved Man, maybe? — bee123 · 24 6/11/19
This card consistently under performs. You should be paid 1 XP to take this card. It's honestly almost always a dead draw. — StyxTBeuford · 12422 8/27/19
1

Anybody else have trouble with ArkhamDB decks adding this after the intro to The Witching hour instructs you to add both it and The Tower XVI to your deck? After the scenario, I tried to add it as a campaign card, but it wasn't there - it was just under the regular assets, and when I added it there, it tried to charge me XP. Did I miss something?

This card is pretty bad. Get that straight. Its bad. But its not irredeemable. A few characters are so action starved that theyll take what they can get.

If you find it in the mulligan, its a free action, nice, but, not groundbreaking. We already have Quick Thinking and Swift Reflexes.

If you dont find it, and have to play it... you pay 3 resources to -move- an action, bank it. That is so goddamn terrible that it begs belief that this is a printed mechanic, yet, even so. There is a demand for it.

Some characters are so damn hungry that they will take any old garbage card to sate that hunger.

You get the picture now, decks that lack access to action economy might want to teck a couple of these every now and then. If there's any other action Economy card in your cardpool, that one is better than this one.

Another, small, consideration for using Ace of Rods is that it's not a bad tagalong tarot for Anna Kaslow, she's an ally with a deathwish and having tarots that self-discard solves some issues that might arrive when she kicks the bucket.

Ace of Rods is not a good card, but i'dd like to say that it gets less credit than it deserves. I highly recommend you try it out, 2 copies, even if only to never try it again.

Tsuruki23 · 1964
I disagree that anyone should ever bother purposely pursuing two copies of this card. One is more than enough to know how terrible it is. — StyxTBeuford · 12422 9/3/19
It's the perfect card for the finale of Union and Disillusion (TCU). I won't say more to avoid spoiling. — Ezhaeu · 38 10/23/19
Ooh, good point Ezhaeu. That would be amazing. Might well be worth paying the XP to add it before that scenario. — gators gonna gate · 1 3/3/20
This card just became reasonable for Dexter Drake as he can effectively play it as a fast action for 1 gold less and there's a chance he can start with it in play. — LondonLeon · 25 1/16/21