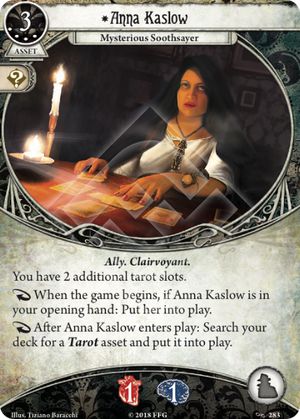 All in all, I think that Kaslowe's weaknesses make her a very iffy card, the dependency on being drawn in the first hand, the cost, the slot, the lack of tank, the XP. Despite the fact that I do like Tarot cards, Anna Kaslow has yet to impress me enough to be worth a whopping 4-xp a pop.

The top characters who might be interested in her are Diana Stanley, Joe Diamond and Sefina Rousseau, the former two because they benefit greatly from both their in-faction tarots so slotting 3-4 tarots isn't out of the question and the latter because her large opening hand makes finding tarot mechanics easier. Also there's always Lola Hayes.

P.S, this point is a bit unfair, but one of the worst feelings in the game has to be: Sitting around with 3 tarots in your hand, 1 on the table, and 2 Anna Kaslowe's laughing at you from somewhere in your deck.

tl;dr Crunched some numbers and got some estimated probabilities for getting Anna and Tarots in your opening hand in different situations.

I wrote something similar in a comment on this deck but I thought I'd post some more stats here for anyone who's interested in taking this card, but is unsure of the chances of her being in your opening hand.

Most people probably pair this with Sefina Rousseau, so we'll start by looking at her. Initially we'll consider the situation when we've purchased 2 copies of Anna Kaslow and 3 tarots, probably made up of The Moon • XVIII or Four of Cups. The table below shows the different events that can occur in an opening hand with this set up and their corresponding probabilities:

We'll look at the same situation as above but with an extra tarot i.e. Sefina Rousseau with 4 tarots and two Anna Kaslow cards:

With 4 tarots we might be worried about dead cards in hand. Here we have almost exactly 1/5 chance of having more than one tarot and no Anna, compared to a little less than 1/7 chance with only three tarots. On the flip side you have have a higher chance of getting a stat boost at the start, just under 19/20 times compared to jut over 10/11 times.

Now we'll look at more standard investigators. Our mulligan rules will be: keep 1 tarot and 1 Anna, replace anything else (unless you have Anna initially then keep 2 tarots). One assumption I've made is that you have 2 weaknesses and 1 signature card (so we're essentially sampling from a pool of 31 cards). Note that if you're looking to keep another card or have story assets that'll stunt your chances of an Anna + tarot start.

Like before we'll look at 2 Anna Kaslow + 3 tarots first:

And with four tarots:

Looks like it could be viable, although even when taking a mulligan for Anna and only keeping a tarot if it comes up, we're still left without her nearly half of the time, but 9/10 times we're getting a starting stat boost with 4 tarots, which is always nice.

Some things to look out for when interpreting/looking at these results:

If anyone has any questions or disagrees with anything I've said, I'm happy to discuss.

To get these probabilities I simulated drawing opening hands 10,000,000 times and just looked at the proportion of each event.

Economy_Weather · 12
Very nice overview, thanks! I'm considering a Joe Diamond Tarot Deck- and these numbers look quite promising. — Kendro · 1 8/16/19
I love this! I'm looking for contributors to help with decipheredreality.com. drop new a line: I'd line to cross post this review the. Andy.cotgreave@gmail.com — acotgreave · 171 8/17/19
Hi sorry about the delay, post this wherever you'd like :) — Economy_Weather · 12 8/27/19
Isn't the 2nd Anna in mulligan played as the game begins, allowing you to draw and play one more tarot ? — LeFricC&#39;estChic · 81 1/25/20
As I understand it, you are not able to play a unique asset if there is already a copy in play, so I'm pretty sure you wouldn't be able to play both Annas (replacing the first with the second) — Zinjanthropus · 185 7/20/20
Studious is also something to consider, statistically. 2x Studious ought to give you an even better chance than being Sefina if you hard mulligan, because you'd be drawing up to 14 cards and have a slightly smaller deck size. 6xp for 2x Studious, though. — Zinjanthropus · 185 12/21/20
7

I want to like Anna, I want to make her nonsense work. It's just tricky to justify when she amounts, more or less, to a 1/1 Ally that grants a net +2 to your skills at a cost of 6 XP (4 for Anna, 2 for the tarots), which literally 14 investigators can get thru Peter Sylvester (2) for just 2 XP, and 6 more can get thru Lola Santiago or Delilah O'Rourke for 3 XP, plus all the sanity/clues/murders they respectively bring.

One novelty, something of a swingy thingy if you feel lucky while playing Carolyn Fern or Roland Banks:

If you draw Anna in your opener/mulligan (odds improved as STTP + AR thins your deck by 4), you'll start Turn 1 with:

Assuming I used this card-draw calculator right, a hard mulligan for Anna puts the odds of landing her at about 61%.

HanoverFist · 435
Prepared for the worst and practiced make perfect also thin their decks and have a chance to find astounding revelations but cost no xp. If their searches succeed they also thin your deck by 8 cards if you attach them to sttp — Django · 3800 7/23/20
Oh excellent idea; I'm building a non-stabby Carolyn deck right now and Prepared For The Worst just didn't make sense, but Practice Makes Perfect absolutely does. — HanoverFist · 435 7/23/20
Sefina already has a fairly high chance of getting Anna in her first hand, as she draws through 1/3 of her deck with her opening hand. I'm not sure how much that would be an actually effective strategy, however, versus some gimmicky fun. — Zinjanthropus · 185 7/24/20
Look at annas review section, someone did the math about drawing anna and some tarot cards. I played such a Sefina deck through FA and found it very effective. Sefina needs will boost at some piont and the tarots compensate her not having acces to mystic LV3+ (that include will boosts). With leo and haste you have actions to spare if you draw some tarots or anna later (using sixth sense for clues and bow for combat). — Django · 3800 7/24/20
I definitely agree that Sefina needs stat boosts. 4wp really doesn't cut it for Mystic 0-2 on its own. Those Rogue extra actions do help a lot with playing late assets. — Zinjanthropus · 185 7/24/20
Sefina kind of doesnt need boosts though. She has Suggestion and Lockpicks. You don’t need much beyond that imo. — StyxTBeuford · 12593 7/26/20
I was used sixth sense and bow because lockpicks exhaust on use. So what to do with extra actions from Leo and haste? So i think sixth sense is better and those tarot — Django · 3800 7/27/20
Make it more consistent to succeed — Django · 3800 7/27/20
I think Lockpicks could actually use a bit of a boost in Sef, as they lose supplies if you don't succeed by 2. Still, both Lola and Delilah are good choices for that. I think the boosts are more necessary for events, though. Backstab and Storm of Spirits, particularly. Pretty expensive to be fighting at 4. Spectral Razor is great, but it's only 2 cards. You can't count on always being able to tuck and paint it. — Zinjanthropus · 185 7/28/20
Welp this combo idea got lodged hard enough in my head that I hadda make a deck to get it out: https://arkhamdb.com/decklist/view/24668/tarotlyn-fern-malpractice-makes-perfect-1.0 — HanoverFist · 435 8/6/20
2

I suppose part of the value of Anna might be for the specific campaign she belongs to. For those who choose to accept their fate (which is the Anna path anyway), Anna in the opening hand can eliminate the risk of The Tower • XVI by having that be the tarot you search and play. Even Anna drawn after opening hand but early in the scenario can be a cheaper way to get the Tower on the table and also protect another tarot you might already have out. To me this seems the best use for her - picking her up along with Charisma if you chose the "accept your fate" path. If you kill her off you can discard the bad tarot and keep a good one.

The trick of course being to get Anna in your opening hand and not the Tower as well. Calling in Favors could be used if you have other allies in the deck to let you keep whichever ally you start with and swap for Anna quickly.

Time4Tiddy · 171
If you have Anna in the opening hand and the Tower, you can still search for another tarot and play it. Then play the Tower, paying it's cost and discard it, when you kill off or "calling in favor" with Anna. Anna just protects your other Tarot from discarding, if you get it into play before the Tower. I agree in general, if you have the Tower as weakness and whant to get another Tarot, I would also get Anna. Otherwise, there is always the risk, that you get a good Tarot into the starting hand, play it for free and soon have to discard it, when you have to play the Tower. — Susumu · 165 2/27/21
2

Sefina with 7 xp. Draws 13 cards during setup and places Anna Kaslow and 3 tarot cards in play at no cost. Starts the game with + 2 Will and + 1 Agility. I can see that nice combo happening.

With other investigators, I don't think so. The neutral tarot card is not that good and you wouldn't want to use splash slots to put a 3rd tarot card.

Ezhaeu · 40
Might be worthwhile (or at least interesting) if you happened to draw The Tower weakness, since she basically can neutralize it for you. She also reimburses herself in actions with the neutral tarot. — pneuma08 · 25 6/13/19
This also seems a pretty good card for Lola since it's a neutral ally and Lola has access to every single tarot. She could boost 3 differrent stats. — Killbray · 1053 6/19/19
Anna Kaslow possesses the power to grant Calvin Wright 7/7/7/7 skills via double 'Five of Pentacles'. — Cluny · 46 6/23/19
Flip side, Sefina draws three tarots in her thirteen cards but doesn't get Anna. Puts one tarot into play for free. Until Anna is drawn, she has two dead cards in her hand and has to pay three resources for Anna and six more for the two tarot cards. — kingofyates · 21 7/7/19
She might be able to play the 4th Tarot from her deck, when playing Anna. — Django · 3800 7/8/19
0

I struggle with the low soak. Other cards with 1-health-1-sanity are not central to deck builds (eg Stray Cat). However, with Anna, you're going to build an entire deck around a strategy (Tarot cards). That strategy becomes highly vulnerable to damage being caused to an Ally. One hit and your strategy is broken. I wish she had at least 2 health or sanity to provide just a little more safety.