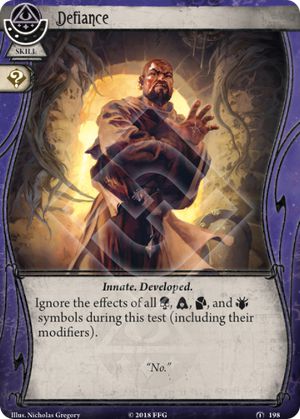 Stealing a joke from the amazing podcast Drawn to the Flame (if you are a big fan of Arkham Horror and haven't heard of them, go listen to them now):

So, stolen jokes aside, this card seems like a pretty nice upgrade over the first. Barring Premonition it's hard to know what kind of token you'll draw. Mystic does have more solutions to this (Olive McBride and Dark Prophecy, for example) but Defiance will still miss from time to time.

This version is a lot more reliable, especially when using any mystic trick to draw more tokens, or maybe seal something. However, this card costs 2 XP, which is a big hurdle. The nice thing about Defiance is that since it's 0 XP, you can put it in your starter deck and replace when you get better cards. It having a icon also means it's never really dead: even if you don't have a way to see more tokens or manipulate the bag, you can just commit it and name the token you want to see the least.

For this card, you need to invest 2 XP. That's a big ask, especially on a skill card you'll use once per scenario at most. As such, unless you have a way to ensure you have a token to draw (Dark Prophecy) I don't really think this is worth it.

Oh, and since both Carcosa and Forgotten Age have ways of manipulating the chaos bag based on your choices, I think the 2 XP becomes even less worth it, as especially in Carcosa you will probably know what tokens are in there.

I'm a fan of this card, it has a funny way of increasing your odds at a test.

On standard, tokens tend to run the gamut of -1 to -4, they can be a nuisance yes, but they do not warrant Defiance level hate.

On hard/expert, those things can HURT. tend to be the most game-y with varied penalties from 0 to -4, god forbid the craziness that tends to key off them in campaign finale's. and strongly tend to be -3 with nasty effects, finally the varies heavily from campaign to campaign, in Core, Dunwich and Circle it's the "punishing token", with a huge penalty and often bad effects, in the other campaigns this token is more routine at -3 or -4.

The thing is, on hard, these tokens can influence your decisions and options so heavily that they limit your choices, some scenarios have tokens so punishing that if you're not testing everything at +3 you're screwing yourself over.

Defiance eases this pressure a lot.

The later in a campaign you get the more special tokens will be in the chaos bag, a few campaigns add very few, others pile them on like sprinkles on a 5'yr old's sundae. Obviously Defiance is therefore much greater value in said campaigns and so/so late in any given campaign. I would never go without it into the finale of Carcosa for example.

My best case for Defiance: It pretty routinely turns impossible tests (The kinda test where you say "Well, I'f I get a !") into something more like a 60% chance.

There are a couple of points I don't see mentioned but I think are fairly important to consider when thinking of taking either this or it's lvl 0 counterpart.

The first is that the card DOES NOT protect you from negative effects that would occur even if you succeed. The big ones being the card loss from Mists of R'lyeh, and the action loss from Rite of Seeking. While the FAQ does mention Baseball Bat, that's a card, so I thought it worth mentioning that you will still have to deal with the consequence of a fickle spell cast. If you really can't afford to give up a card or you really need to investigate as your first action with RoS, Defiance will not help you. You will also be forced to spend a charge from Seal of the Seventh Sign.

To explain, Defiance blocks the effects a symbol token attempts to do as indicated by the scenario reference card; it is otherwise ambivalent towards your assets and your cards in general. Which brings me to Ritual Candles.

If you are using Ritual Candles, Defiance WILL NOT impede on the +1 skill boost. In some (albeit unlikely) cases, you may use this in tandem with two candles and then trigger, say Olive McBride or Dark Prophecy, to then turn what would have been a -4 (or , , ) into a +2. That's a significant difference. Part of the reason Olive is useful for this is that she can absorb the hit from the if necessary. And if you have access to say, cards, then you can confidently trigger succeed by 2 effects and other combos with greater assurance. And this does differ from Counterspell which, while protecting you from spell side effects, costs two resources and will definitely prevent candle bonuses. Though, I'm getting ahead of myself. Probably you'll just want to remember that Defiance doesn't disrupt your Jewel of Aureolus.

Lvl 0 Defiance can be used to target a popular token in this way, or to debuff a particularly dangerous token, but the choice may not be so easy, especially on harder difficulties. There is the possibly of it serving the measly bonus of being just a since no such symbol token may be drawn. This upgrade provides the opportunity to play cards that draw lots of tokens or hunt for specific symbol tokens in confidence because the is certainly not going to waste. Just remember that all consequences to symbol tokens from your play area will remain in effect.

LaRoix · 1427
One other points not mentioned is that Silas can get cheeky with it. Per the FAQ on level 0 Defiance, "Defiance creates a lasting effect", so unlike many skills that have triggered abilities during resolution, he can still get the safety net out of it while also bouncing it back to hand. — Death by Chocolate · 640 7/12/20