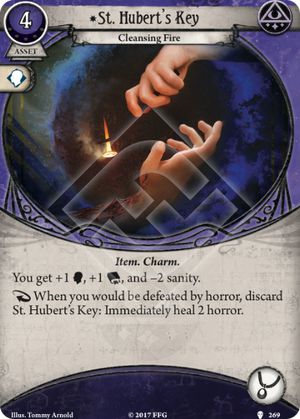 I ran this card with... Daisy Walker ! And it's pretty good. The -2 sanity penalty is really not an issue, as Daisy have a sizeable pool of it. Then, you don't die already if defeated by horror. So that's ok, just be a bit more cautious. Or not. Because you get a +1 and +1 , two important stats for Daisy. It fills your accessory slot, which is not contested in most Daisy's deck, as I generally find this better than Holy Rosary. It's 2 resources more, but the static boost is better. On the 5 top Daisy decks on this site, 3 have the Holy Rosary and the other two no accessory.

This might be easy to misread, so just a clarification.

Taking -2 Sanity is not the same as being dealt horror, I.E this is not horror you suffer or a permanent reduction in horror health. Therefore the net benefit of St. Hubert's Key is:

In other words, this card gives you the exact same benefit as a Holy Rosary, and then throws in the extra +1. The difference is however that St. Hubert's Key self-destructs and automatically heals you when you hit your reduced Sanity threshold, thus while St. Hubert's Key gives you a bunch of extra power and safety you must still be careful or you'll loose it faster then you'dd like.

St. Hubert's Key does not invalidate Holy Rosary, the latter is still a much tougher asset than the former and in the mystic's already expensive lineup of key assets finding the extra cash to pay for an often unused boost is hard. Often the St. Hubert's Key will find itself sought after by non- characters like Daisy Walker, "Ashcan" Pete or Rex Murphy who will better appreciate the extra since they spend a lot of their time using that skill to begin with. Note that the reduced Sanity stat has an interesting interaction with Desperate cards (Like Reckless Assault).

Currently the lineup of character's will prioritize tests over tests, and often paying the extra cash will just be a waste, since you will spend a lot of your time utilizing a Rite of Seeking or the like. Note that your experience with this card will vary with difficulty, an of 4 for example (like Jim Culver or Father Mateo with the St. Hubert's Key) will get you much further against difficulty 2 locations in standard than it does in hard and it'll be much easier to bridge the gap for higher difficulty locations with other cards. An of 4 will succeed on a difficulty 2 investigate in The Gathering 80% of the time on standard but just 60% of the time in hard, that's the difference between finishing a 2 clue location (Study) in one round or two.

Tsuruki23 · 927
In other words, you never opt to take St. Hubert's Key over Holy Rosary, unless the Intellect boost really matters. — matt88 · 1367 6/19/18
What exactly does "-2 sanity"? Is it defined in the rules somewhere? We playe it like "take 2 horror" when such a card enters play. Or does it mean "reduce current and max sanity by 2", which will be regained when the card leaves play? — Django · 2361 6/20/18
@Django There is no ‘current’ or ‘max’ sanity in AHCG. There is just Sanity - which is the value listed on your investigator card. When you have horror on your card greater than or equal to your Sanity, you are defeated. — Death by Chocolate · 13 6/20/18
It is -2 to your "current and max sanity" (just called 'sanity'), then when you die, that penalty goes away and you heal 2 horror. So it kinda has horror-soak like the Rosary, except you need to lose the Key to activate the soak, and you also need to run with a smaller max pool in the meantime. — duke_loves_biscuits · 599 7/5/18
1

Since this card has been spoiled i managed to proxy it and play a few times in Jim Culver deck and it turned out to be pretty good. In builds i usually use Jim investigates using and fights using . So this card boosts two of those critical stats add Alyssa Graham and you don't even have to use seeker cards for investigating, freeing up 5 flexible slots. Lowered sanity doesn't really hurt. The biggest downside is cost of 4 resources but it's really worth paying that much.

Zuntir · 502
I've not had the opportunity to run it yet, but it seems like this card is going to be a fast favorite of all of the Dunwich investigators (aside from Zoey as it competes with her signature asset). I know it's everything I've ever wanted in an out of faction card for Jenny, allowing her to hit that 4 will 4 intellect sweet spot which gives reliable resistance against the encounter deck, and just enough raw investigating power to get by just fine when complemented by Flashlights, Lockpicks and of course Streetwise (certainly makes Dario el-Amin look . I could see it being absolutely ridiculous on Pete, lowering his base sanity to the exact amount needed to utilize the "desperate" skill cards while comboing with cards like Dark Horse and that one asset from the Carcosa campaign to boost his stat line and overall reliability in succeeding at skill tests to the max. — gionazzo · 44 2/22/18
certainly makes Dario el-Amin look incredibly weak/slow by comparison** (do we really not have an edit function?) — gionazzo · 44 2/22/18
Dario is incredibly weak and slow.. im really not sure who makes half of the investigator cards and whose making the other half, but theft hand has no idea what the right hand is doing.. by this time, with all of the experience FFG has making LCG games you would think that they wouldn't make these mistakes.. not only that, ill go af far to say this card is going to be on the table in probably every deck that can take it, and will be abused and reused unlike 2/5 cards that they make.. it's kind of absurd that some cards are so powerful, and others are actually so bad no one even considers putting them in a deck. — oCCult · 4 2/24/18
1

If I’m reading this right (please feel free to tell me otherwise) ‘when you would be defeated by horror, discard St Hubert’s Key: immediately heal 2 horror’ means it has the added benefit of being a single use get out of jail free card so that even if you were on 2 sanity and about to die from taking 3 or 4 horror you could still survive with 2 sanity?

I suppose it depends on when you get those 2 horror healed but I think if a flashlight can never take a shroud value below zero it would be the same principle that your defeating horror can never take your sanity below zero. It seems to make more thematic sense this way and could make for some ‘miraculous’ play especially when fighting a boss for example, you could tank the damage for just long enough to buy your team another go round without anyone dying.

Snakesfighting · 72
That would be neat, but it doesn't quite work that way. Your flashlight analogy doesn't apply; horror doesn't reduce your sanity, you simply put "x" horror on your investigator. Then if your total is higher than your sanity, you're defeated. If you have this in play, you'd discard it, heal 2 horror, then if you still have more horror than sanity you're still defeated. — SGPrometheus · 187 1/6/19
What SGPrometheus said but: “then if you still have Horror equal to or greater than sanity, you’re defeated.” — Death by Chocolate · 13 1/6/19
To be more specific when this card enters play it reduces your max sanity by 2. when you’d be defeated by horror it heals 2 and restores your max sanity. It’s effect interrupts the process of becoming defeated. But if you took 4 or more you’d still go insane. — Django · 2361 1/9/19
I now realise the benefit, it allows you to play the 4 icon skills cards sooner. So if your Ashcan Pete with 5 sanity and you get St Hubert’s Key out you can than start playing Reckless Assualt or Run For Your Life. I think the investigator for whom this would really shine however is Silas Marsh, imagine returning Say Your Prayers to your hand, over and over again? I swear you’d think god was actually listening for a change! — Snakesfighting · 72 1/24/19