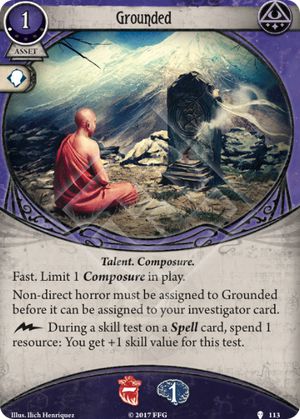 I'm not sure why the designers felt compelled to break with the typical Composure design on Grounded, but it makes it markedly worse than the other four Composure cards released in Echoes of the Past. In most respects it is identical to the others. However, instead of having 2 skill icons and boosting 2 different skills for any skill test, Grounded has only 1 icon () and can only be used for skill tests when casting Spells. Most importantly, this means that, unlike the other Composures, Grounded can only be used on skill tests you initiate, not those required by treacheries, etc. This is a huge drawback, relative to the other Composures.

Additionally, the condition of all Composures that horror must be placed on it before being placed on your investigator is more or less mutually exclusive with Agnes Baker's innate effect. Essentially, you must decide either to not use her innate horror-for-damage effect--a key aspect to playing her--in order to use Grounded or Plucky, or discard the Composure and the benefit of its bonuses in order to use her effect.

Maybe if the designers had lowered the cost of Grounded to 0, and/or gave it 2 icons, and/or gave it 1 health instead of 1 sanity (though, that wouldn't really fit the theme), it would be a little more worth it. Or perhaps in the future there will be treacheries with the Spell trait, or Spell assets/events that use a skill other than that can benefit from Grounded. Even then, though, I'm not sure it would compensate for not being able to use its bonuses on treacheries or other non-Spell skill tests. Time will tell.

Funny. Ward of protection and Shrivelling both deal you horror. So in any conventional Mystic deck this thing, intended to empower spells, is guaranteed to get blown up by said spells.

You get to use this thing once. Case closed, thing sucks.

P.S: Unless your spell assets are Rite of Seeking and Mists of Rleth, no Shrivelling in sight, then, eh, sure, it okay I guess, but who would build such a deck!?

Tsuruki23 · 2348
You do realize that you can still put horror on other assets - like the Holy Rosary or allies. I’m not saying Grounded is great, but it isn’t as useless as you present it as. — Death by Chocolate · 1256 10/13/18
Yeah this review isn't terribly helpful. The card has many issues (not the least of which being it basically only boosts one attribute in one situation unless you build your deck to include non-wp spells which we have few of atm) but asynergy with WoP and Shriveling really isn't too hard to overcome. — Difrakt · 1174 10/16/18
Agnes and Peter Sylvestre disagree with this review — vidinufi · 57 1/13/20