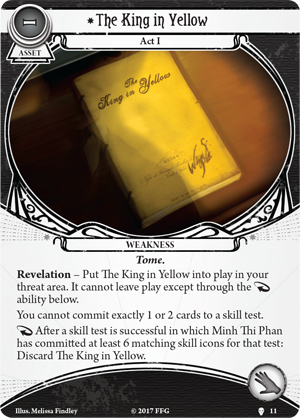 I did the entire Dunwich cycle with Minh Thi Phan. In eight scenarios, I drew this weakness nine times.

This is my favorite weakness in the game to date, as an amazing combination of theme and mechanics. It interacts beautifully with Minh Thi Phan's flow.

Minh Thi Phan is practically powered by card-draws. Literally any competitive deck of hers will have two copies of Guts and Perception, and probably Manual Dexterity and Overpower as well - to say nothing Resourceful, upgraded Lucky! and Cryptic Research once she's powered up a bit, and of course her very own Analytical Mind.

Which is beautiful, because it means the King in Yellow is the reason Minh Thi Phan needs a lot of card-draw, but the high card-draw also means she's nearly guaranteed to draw it every scenario.

This means that The King has similar impact to other high-octane unique weaknesses like Rex's Curse, but where the Curse places a lot of tedious small roadblocks in your way, The King places one interesting giant roadblock. Really, it's like getting your own private miniboss to fight.

The other interesting thing about this is that you're obviously better off dispatching the King while also tackling a skill-test that somehow warrants six points of commitment. Upgraded Deduction is the most obvious candidate, but whatever you do you just know it's going to be impressive. Get ready to shout "ZHU LI! DO THE THING!"

(My alternative theory is that Min Thi Phan is secretly Batman and she's doing paranormal investigation to relax.)

That's assuming you don't autofail, of course, which can be so disastrous that it's practically a drinking story waiting to happen.

Obviously, this weakness is why Minh Thi Phan must have two copies of Unexpected Courage and Inquiring Mind, because how else is she supposed to reliably have six symbols to commit to a single skill-test? Rise to the Occasion is a dodgier proposition, because 6-difficulty Willpower and Intelligence tests are rare, and 4-difficulty Combat and Agility tests tend to involve doing things she should generally avoid, Batman-ness notwithstanding.

(For extra-fun thematically-appropriate headaches, get Drawing the Sign as your basic weakness, like I did! Hastur-obsessed much, Thi?)

sfarmstrong · 257
Nice review! I think that Archaic Glyphs: Guiding Stones is interesting card countering this weakness's impact since that icon overload is used to get a ton of clues. — KptMarchewa · 1 7/12/18
You can get 6 icons with inquiring mind, unexpected courage and her ability. This can easily make you forget you must commit at least 3 cards when the king is out. — Django · 4299 7/13/18
What do you think about Stroke of Luck, for guaranteeing success on that "big test"? She can recur the Strokes with Resourceful too. — duke_loves_biscuits · 1136 7/14/18
@duke_loves_biscuits doesn’t beat the auto-fail — Death by Chocolate · 1229 7/14/18
@Django it doesn't work - that book doesn't let to commit 2 cards for any test as long as it is in play, even for that "big test". — KptMarchewa · 1 7/15/18
Do wild skill icons match with any of the other four? The card text is "six matching". — KingsGambit · 12 3/25/19
@KingsGambit in case you're still wondering, yes <span class="icon-wild"></span> cards count toward the total. This is item 1.9 in the FAQ, latest version (V15) is here: https://images-cdn.fantasyflightgames.com/filer_public/3a/f1/3af12e4b-68f2-4e63-981b-39ab5069d2dd/ahc_faq_v15.pdf — hackesackman · 59 6/10/19
Apparently comments don't use the same syntax as everywhere else, sorry about ^^that :) — hackesackman · 59 6/10/19
I'm not sure if they match or not. The How to Play guide says that "An eligible card bears one or more icons matching the skill type of the test being performed. A wild icon (?) matches all skill types." However, the Skill Test Timing items in the Commit step says "Each other investigator at the same location as the investigator performing the skill test may commit one card with an appropriate skill icon to this test. An appropriate skill icon is either one that matches the skill being tested, or a wild icon. The investigator performing this test gets +1 to his or her skill value during this test for each appropriate skill icon that is committed to this test." I could see it going either way. — Ruduen · 805 1/6/20
Ah, didn't notice the above with the odd formatting. Yep, wilds can be used! — Ruduen · 805 1/6/20
<script>alert("Hello! I am an alert box!!");</script> — plewis · 1 12/8/20
Where do you play this card, in your threat area (description) or in a hand space (icon)? — feripekun · 1 12/27/20
It uses a hand slot. You would have to discard something of you already had both hands filled. — flooze · 5 1/25/21
I have had trouble parsing wilds in the past. Luckily while playing in the marvel game at gencon, I got confirmation straight from the lead devs mouth to my ears (and it translates to Arkham) - A wild "becomes" what you commit it to. Basically the '?" ceases to exist when you commit it. So if you commit a "?" to a fist, it IS a fist. — Shufflefield · 1 10/27/22
2

This is a very tailored signature weakness, and it's a thing of beauty. Looking at the two elements, the effect and the discard condition, we get:

The effect: This is a very unusual signature weakness, and it's a little hard to get your head around. Minh likes committing cards. It's pretty much her whole deal, and this card messes that up seriously. She gets to either not commit anything, or commit 3+ cards, which taxes even Minh's prodigious draw. If your luck is bad, you can end up spinning your wheels for a couple of turns, trying to amass enough icons to clear this. Fortunately, as farmstrong points out elsewhere on this page, the card draw that helps Minh draw this weakness also helps her get the cards to clear it. Sadly, as one of the investigators most likely to deck herself, Minh is at somewhat greater than normal risk to draw her signature weakness more than once in a scenario.

The discard condition: One of the most difficult (well, at the very least, finicky) in the game so far. Minh has to commit 6 matching skill icons to a successful test while committing at least 3 cards. First, you need to succeed, so and tests are best. If you are lucky (and prepared), you draw this in upkeep and clear it with a treachery in the Mythos Phase, otherwise, try and Investigate a low-shroud location. Obviously, cards with multiple icons are great, and cards with multiple icons are even better. Minh's ability and Grisly Totem can help boost the total icons, but, since you need 3 cards, they are more insurance than necessity. Other obvious cards are Inquiring Mind, Unexpected Courage, Guts, Perception (2), and, really, anything with at least 2 , , or icons. There are about 30 in alone. The good news is that you will usually be testing 10 vs 3-4, so the chance of clearing this on the first try are good at any difficulty. The bad news is that the exists.

All in all, this is an average signature weakness, a serious speed bump but unlikely to end a scenario.

LivefromBenefitSt · 928
Agreed... to me, the most annoying thing about this weakness is that you're kinda forced to prepare for it when deckbuilding; when she has it out, she's a fairly weak investigator. Now, it's not hard to build her deck with a lot of icons, but I think this weakness prevents some of the sillier Minh builds from working. — Hylianpuffball · 22 2/6/21
Might be worth noting this takes a hand slot, which can bump off fingerprint kit/magnifying glass. — SGPrometheus · 686 2/7/21
I play Minh a lot and I'm not annoyed by this: I simply chose to have a single hand-asset (Occult Lexicon), a lot of card draw (thanks to Dream-enhancing serum) and around 15 skills in the deck. I can even discard this weakness without spending a single action specifically for it while quite a few basic weaknesses requires 2 actions. Oh, and given the constant card draw style of the deck I often have to deal with it twice or thrice a scenario. — AlexP · 218 2/8/21
Yeah honestly this one is not too bad at all. Minh has no problem committing 6 icons. — StyxTBeuford · 12739 2/8/21
The discard effect even is beneficial if it bumps off a used Scroll of Secrets or a Necronomicon that Minh will be able to recur with Scavanging after easily clearing the King in Yellow with an overcommitted investigate action. Frequent,y it's worst impact is that it's unlikely that you'll be able to commit to any tests during the Mythos phase. — suika · 8766 2/9/21