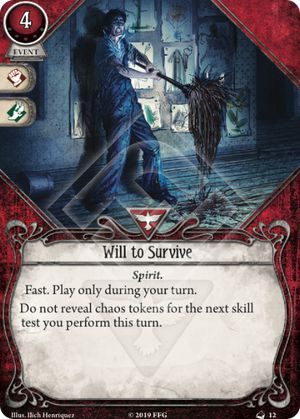 While I understand the logic behind this card as a down-leveled version of the popular classic. I believe printing this card was mostly a mistake. In most non-Preston decks, this card is just too expensive for what it does, and even in young moneybags, he has to boost on top of this to still succeed at something.

This card's natural home is in one main place: Jenny "Stop The Flow Of Time!" Barnes. It replaces the Premonition that tells you how much to commit/pay to hit your goal with... just flat out guaranteeing the (over)success in a very clean way.

Maybe I'm wrong and there is a middle ground existence somewhere for this card, but I predict it will mostly be underwhelming or degenerate with little in between.

Death by Chocolate · 1229
Agreed completely. For Preston even, without Donut, 4 resources is a lot, giving up the ability to do almost anything else that round. You might Intel Report for 2 clues with that money, which is usually much better than one clue. — StyxTBeuford · 12739 8/30/20
The All In you linked to is the All In agenda from House Always Wins. — Soloclue · 2367 9/13/20
@Soloclue OOPS! I’ll fix that, thanks. — Death by Chocolate · 1229 9/29/20
I’m still confused what this card is used for? In my mind, not revealing a chaos token means you cannot proceed with the skill test? Is this to “mute” other (negative) outcome from treacheries or events that are dependent on the chaos tokens being revealed? — HeathrowT5 · 1 6/3/22
@HeathrowT5 Not revealing chaos tokens means that you are just comparing your skill vs. the test. This is useful if you are at or above the test and don't want to pull negative tokens, or if you want to fail and don't want to pull positive tokens. — Time4Tiddy · 213 7/4/22