Revelation - Choose two of the following actions (investigate, fight, evade, move, or play). For the remainder of the round, each investigator cannot perform each chosen action. If this is not the first copy of A Baleful Welcome drawn this phase, choose three of those actions instead. 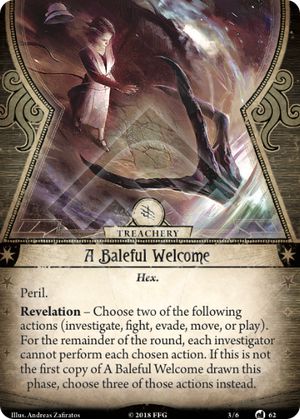 Rules Question: Does picking 'investigate' turn off only the basic action, or also investigate actions on encounter cards and assets?

kision314 · 1
Short answer: 1. yes, 2. no. Longer answer: if the chosen action category is being taken as a result of an Action ability--whether basic or activated from an asset, this treachery would "turn it off." If the action being taken is as a result of a fast card, a free action trigger ability, and suchlike--since it doesn't count as an action in the first place, this treachery does not turn it off. There might be a wrinkle if the card gives you an action in BOLD type, like on shortcut level 2 or summoned hound but i'm going to go out on a limb and say that you can take those actions as well. — Sycopath · 1 5/3/20
@Sycopath I think actually you cannot use Shortcut(2) or the hound, specifically because those use the bold action designator. If it said, "investigators cannot TAKE each chosen action..." I would agree with you, because that language specifically means you're taking one of your three basic actions, which those cards avoid. Because this says investigators can't "perform" the named actions, I take that to be a wider parameter which also covers free actions. — SGPrometheus · 207 5/4/20