What Lurks Below (v. II)

Mythe
Intrigue. Stage 2
Doom: 6. Clues: –
"Glancing up at the window I had left, I observed it was still dark, though far across the crumbling chimneys to the north I could see lights ominously blazing in the Order of Dagon Hall..." - H. P. Lovecraft, The Shadow over Innsmouth 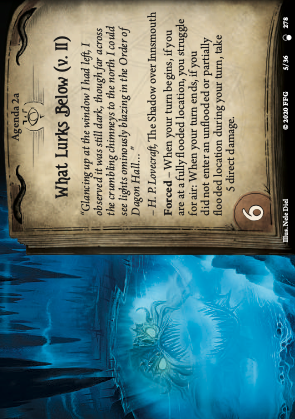 Intrigue
Hearing footsteps up ahead, you press yourself against a nearby wall, fearing the worst. You and your would-be ambusher leap out at the same time, brandishing your weapons... then immediately withdraw once you recognize one another.
"Oh, it's you," Dawson says, holstering his handgun. "I've searched that entire wing," he says, motioning to the hall he came from. "Found this, but not much else." He offers the key in his possession, then pulls out his flashlight and takes the lead. "Might as well stick together from here on out."

Remove 4 tokens from the chaos bag. 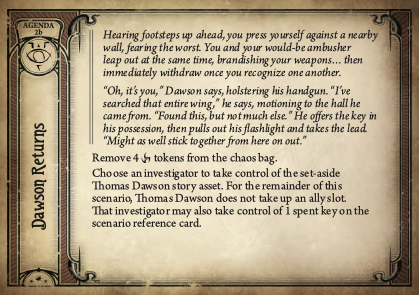