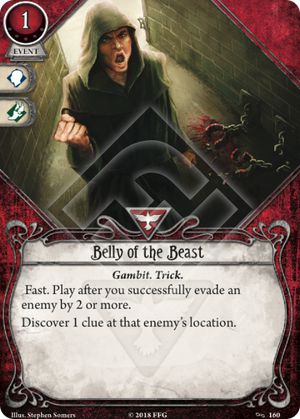 The effect on this card is clearly very powerful, as we have seen with Working a Hunch the ability to discover a clue without a test or even an action is invaluable. This card has the same powerful effect but for one fewer resource, and in a faction with less competition for clue gathering tools. The catch here is that in order to play it you have to successfully evade an enemy, and over-succeed at that.

This downside is both more and less severe than it can initially seem. The biggest problem posed by this restriction is that if there is no enemy in play, this card is mostly dead weight. This isn't helped by the pretty feeble skill icons provided by this card, as compared to the broadly useful double icons on Working a Hunch. In addition, even if there is an enemy in play, if you aren't engaged with it then you're going to have to spend an action to engage before spending another to evade which significantly reduces the efficiency of this card.

While enemies are common enough that this card is unlikely to be offline for more than a turn or two at a time, there is the additional caveat that the enemy has to be on a location that it is valuable to discover clues from. If the enemy you need to evade is on a low shroud location you are forced to make the decision as to whether you will fire it off now to guarantee getting a use out of it, or if you hold onto it in the hope of using it on a higher shroud location later on. Even worse, an enemy may spawn on a location with no clues at all.

Finally, its not enough to just evade an enemy, you have to succeed by two or more. This likely means that you either need to be evading a low evade enemy, or you are needing to overcommit to the test to ensure Belly of the Beast can be used. In the former case, you are placing another restriction on its usability, making it more likely that you never get to play it in a scenario. In the latter case, by needing to commit resources to ensure over-success you are mitigating the advantage that you gain by test-lessly gathering clues.

In summary, this card is no Working a Hunch, and I dont see it reaching the same level of ubiquity in Survivor as Working a Hunch has in Seeker. So what is Belly of the Beast good for?

What I see as the power of Belly of the Beast is the way that it lets you convert your strengths in one area into success in another area. In this case, letting investigators who are already very good at evading leverage some of that power to gather clues as well.

Investigators that I think will find this card very useful are:

One oddball pick for this card could be William Yorick who can use Handcuffs to evade with his reasonable score. Though reliably finding humanoid enemies to evade makes this a little more niche, and Yorick doesnt have a shortage of ways to grab clues.

birdfriender · 195
Great points and a fantastic review. Personally, I don't think I'd run this card in multiplayer because the conditions are high and the pay-out for a single clue is low. I'd love to see an upgraded version which says "after you successfully evade, discover a clue. If you succeeded by two or more, discover an additional clue". — Gyara2020 · 1 4/29/19
Personally I see a bigger correlation with Evidence then Hunch — Tsuruki23 · 1781 5/14/19
It's the "2 or more" that prevents this card from being really good — Chitinid · 13 6/22/19
The effect is great but having a enemy on the same place as a clue, and evade him by 2+ seems incredible situational to me. At least with Wendy Adams the Lockpick mentioned is the main reason why I wouldn't use this. — Venti · 1 6/9/20