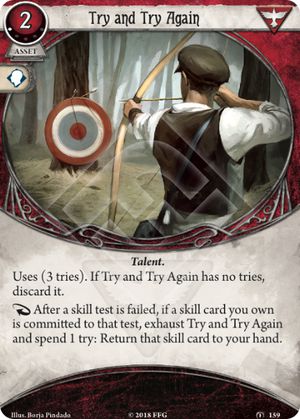 While spending 3 XP on Try and Try Again was a solid plan only on higher dificulties, this slightly weaker version of a card begs for more attention. Every investigator supports himself with skill cards and there's never anything as bad as investing a skill card with additional effect, that just fizzles. Especially when that effect was about to bury an enemy, that right now all of a sudden has a survival license and will kick your butt badly in the enemy phase. So any Vicious Blows, Resourcefuls or Survival Instincts are more welcome to proove it's worth.

The stakes are even higher when you've just threw your last Last Chance out of your pocket (as your final card of course) and found out that Cthulhu did not found that impressive enough, pulling you a .

My favourite investment though is an inclusion of Double or Nothing in either Wendy or Pete deck, which enables a more reliable time compression, when protected by this humble card. This idea is already on the table with Will to Survive, but for a bigger XP investment.

It may be just a personal preference. If you're a cautious player that likes to be sure and overinvests just a tiny bit into every test, you're decks probably reflect that and you prioritize cards that just deliver. If you're more on the crazy side of things, that asset enables you to be yourself.

Onetribe · 265
And Minh can take it to great effect! — mogwen · 237 8/4/18
@mogwen imo this downgrade comapred to 3xp version is adapted to Minh like 1lvl Book of shadows was made for Daisy. — KptMarchewa · 1 8/4/18
Is this really that much better than a Rabbit's Foot for Minh? Is it really better at all? I'm not sure. While I would concede that returning a skill to your hand is usually superior to a random draw, is it so much better that it's worth an additional resource, an additional XP, worse icons (a big deal for Minh), and being limited to 3 uses? Not sure about that. — CaiusDrewart · 2598 8/4/18
It is also slotless. There are a lot of good relics and and not having to invest in relic hunter too use this and another relic is additional upside. — jsronce · 1 8/31/18
In my experience, Minh Thi Phan doesn't fail skill tests often enough on Normal or Hard to use this in the ordinary course of events, but it may be a crucial hedge against auto-failing when she's trying to remove The King in Yellow, so that she can at least hang on to one of her cards and commit it again later. — sfarmstrong · 248 9/5/18