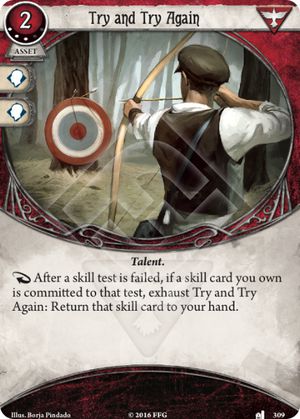 This card needs two reviews, so I'll keep them short.

You know that skill test you really want to succeed on, so you throw at +2 card and some resources at it until it becomes an auto-success, smugly pop out a token only to have your smile wiped from your face as you glimpse that all-red of an auto-fail. This is a pretty good description of how easy/standard games might spiral out of control, but it is still a rare enough occurrence that the inclusion of this card is almost definitely not worth the XP. The benefit of this card in standard is mostly that you can throw cards at problems where spending cards wouldn't normally be worth it, for example to try an Investigate check at a net + of only 1 or even 0. And then on those checks where you do your best to eliminate the failure chance but the bag just wont play nice.

The other review is for hard and Expert, where your experience using this card will become starkly different. The token bag at this difficulty is far less forgiving at this difficulty and you will find that sustained skill attempts just wont work like they do at an easier difficulty, throwing a character's unmodified 3 at a difficulty 1 or 2 problem is drastically less likely to succeed, this card re-enables that strategy to an extent. I don't think it needs any further explanation that a card that rewards failed checks becomes dramatically better in game modes where failed skills are more common.

Ever fail so hard you win?

(My review needed to be two hundred words to post. So I wrote a useless blurb on the bottom of my review. Honestly this process seems kinda of silly all things considered. I mean If someone can articulate a thought in a concise way without a long winded review wouldn't that be superior.)

redtitan · 47
There's been several discussions about this. Unfortunately, Take Heart and Try and Try Again do not combo together. Try and Try Again is a response to a skill test failing that occurs in Step 6, when you determine success and failure. You apply the results of failure (e.g. Take Heart) in Step 7. So you could return Take Heart in Step 6 using Try and Try Again, but you wouldn't get any benefit from Take Heart in the process. The upgraded Grisly Totem on the other hand does apply during Step 7 and will combo with Take Heart. — StyxTBeuford · 2320 6/27/19
Isn't the wording similar as in Grisly Totem, so Matt Newmanns response that Grisly Totem triggers in Step 7 applies to "Try and try again" as well? — Django · 2800 6/27/19
Sry, ignore my last comment. I hadn't read the detailed answers to Grisly Totem. — Django · 2800 6/27/19