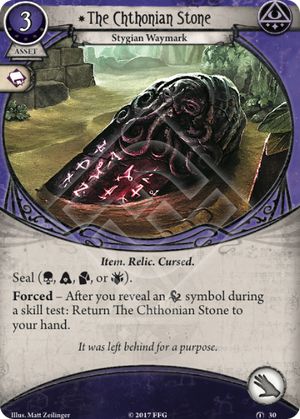 Let's look at this card line by line.

First analysis is that it's very strong.

Math suggests that with 16 chaos tokens in the chaos bag (15 after playing) while performing 2-3 skills tests a round it'll last an average of 3-4 rounds before returning to your hand. This is still largely chance based. This equates to 1 resource per round.

Pairing with cards like Time Warp or Seal of the Seventh Sign can add to this cards duration.

In multiplayer, playing this as a final action is a great benefit to the whole team, especially if you go first.

Can be searched for with Backpack or Dr. Elli Horowitz

Able to cast after Emergency Cache.

Now lets compare to Protective Incantation who is very simular.

Final Anslysis: I Think The Chthonian Stone is a great card, but probably only as a one-of as the second copy is dead in your hand and only commits a . Most scenarios have one token that is worse than others & this can seal it up. It's extremely powerful in multiplayer & gets stronger with more members. You normally get 3+ rounds with it in play, with Time Warp you can double it's duration. Cheaper per round than than Protective Incantation and doesn't use a valuable arcane slot for mystics.

You could run 1x The Chthonian Stone and 2x [Protective Incantation] (/card/04031) and seal up to 3 chaos tokens, but that gets expensive really quick & there is no easy way to do this keep up the resource dedication.

I especially like this card for Jim Culver and Norman Withers decks.

Calprinicus · 2649
Can someone please explain to a relative newbie why this card is ‘unique’ and that you can only have one in play? I’m probably being thick but I can’t find a reference to this anywhere. — robgrainger78 · 1 11/17/20
Star next to the cards name = unique (only one can be in play at a time). This does not mean you can't include two copies, only that you can't have both in play at the same time. — Zumi · 1 11/23/20