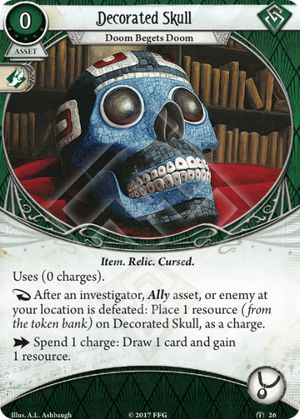 Akachi can benefit from this card too, as it has charges and enters play with 1 charge thanks hes passive ability. Meaning that it refound it's cost as soon as you use that extra charge with the benefit of already having it in play. Also her Elder Sing trigger can put some charges on it and Recharge card can target this, so might be worth a try.

vacra · 7
Akachi also will typically be fighting a monster or two and trading out allies like Renfield and the Arcane Initiate. I think its a solid pick for her. — Myriad · 670 5/11/18
5

To analyze the skull, we consider the cost and the benefits. The effect of the skull is that each time you spend a charge, you gain a resource and a card. But anyone can spend an action for a card or a resource, so the real benefit of the skull is that it gives you the other one as well. This means the skull gives you one of whatever you least want at the time – if you really want a card, you could have spent the action getting a card even without the skull, the benefit of the skull is that you also get a money. If you wanted a money, it gives you a card, and if you really wanted an action, you aren’t going to spend that action on the skull, so the skull is useless. So the upfront cost of the skull is a card and an action to play now, and the benefit is to gain one of whatever you least want, in the future, for each time you use it. So using the skull 3 times is kind of breaking even, you would want to use it 4 times to feel excited about taking the card. And since the skull is useless when drawn late, if you draw it early you want to use it at least 5 times to think it is a good card.

In my experience, it is very possible for a combat character (in a 4-player party) who plays the skull early to pick up 5 charges – indeed, to pick up all the charges they can handle. The real limitation is the actions you have to spend to use these charges. The analysis above is that if you would have to spend at least 5 actions gaining cards and/or resources, after you start gaining charges, to be happy with the skull. And that assumes you would have been happy spending the actions even without the skull (otherwise the skull really isn’t practical at all). But in my experience, most characters are kept very busy, and don’t spend that many actions over the course of a scenario drawing cards or gaining resources – and when they do, it is often at the beginning of the mission when the skull wouldn’t have charges. It is a special sort of character who has that much free time during the mission.

The Decorated Skull isn’t the sort of card that is really going to blow anyone away with its amazing power, you aren’t missing much if you never use it. But it can be fun and useful for a very specific type of character – a dedicated monster killer (so you put yourself in the right place to get lots of charges) who can’t investigate (so you have free time) and who is in a party with plenty of ways to deal with monsters (so you aren’t under constant pressure to save your friends, and thus have more free time), and who doesn’t need the accessory slot for something else.

ChristopherA · 22
It's worth noting that Akachi can take this card. In her hands it's a lot more useful because it stats with a charge as soon as it hits the board, it can be discarded with Spirit Speaker as a free action to liberate all its charges as resources and it also serves as a handy charge bank for if you want to play Torrent of Power. The only drawback is that it competes with other powerful cards for the accessory slot, but I think it is probably worth it. — Sassenach · 89 7/27/19
4

I think this card is hilarious. The fact that when other investigators are defeated you can be like, "Hey, silver lining; I got a charge on my Skull!" is priceless. Beyond that, I'm pretty sure this card is actually good; installs for an action, gains charges for doing something you'd do anyway, whether that's going through Ally assets or killing enemies, and pays back the action you took to install it after a single use. In a Leo Anderson deck, where you're losing allies and killing enemies in equal measure, the action compression this can give you over the course of a scenario, let alone a campaign, is pretty crazy. It may seem a bit slow, since it does take an action to use every time, but there are a lot of turns in a scenario where you might have an odd action that you "waste" just gaining a resource, and this makes those spare actions twice as efficient.

Does take up the Relic slot though, which is pretty valuable. Still, between The Watch and Lucky Dice, it's the only accessory Rogues have at 0xp. It'll be interesting to see it in action.

Also how weird is it that it's cursed, but doesn't actively harm you?

SGPrometheus · 188
I think the Skull is a solid accessory for any Rogue who will be fighting enemies, Leo, Akachi and depending on the group, might be a good choice for Ursula as well (since she can find it quickly and possibly play it without an action). — Myriad · 670 5/11/18
Wouldn't Akachi prefer Holy Rosary? She doesn't necessarily need it, but getting up to 6 Will is really strong. As for Ursula, while she can get it into play for free a couple ways, she might not see the trigger conditions very often, but I agree it might occasionally be a good fit. — SGPrometheus · 188 5/11/18
I would also give preference to the Rosary for Akachi's amulet slot. +1 Will is a big deal for her. — CaiusDrewart · 1648 5/14/18
3

This card scales extremely favorably in 4-player games. If you've glossed over the Skull in 2-player (the most common format), but are invited to a 4-player, then do give it another look.

It sadly does clash with the Rosary for Akachi and Sefina, but Ursula, Leo, Wendy, or any of the other Rogues can make good use of it it in a 4-player game. I'm not sure I'd go as far as spending a splash-card for Pete, Rex, etc though.

duke_loves_biscuits · 600
Clashes with Wendy's Amulet, so I might not rush at that for her. — AndyB · 391 7/5/18
It also seems decent even in two-player for Zoe (who kills things all the time and doesn't have many other economy cards) or Finn (who kills things often enough, and doesn't have access to any must-run accessories at the outset). — sfarmstrong · 62 7/12/18
0

Does the ally or enemy discarded from field or deck, trigger this card? I'm thinking about use the disposable ally like