If you have 10 or more resources: Parley. Test (2) to fraternize with Jordan. If you succeed, take control of 1 of the clues on Jordan Perry.

Forced - When the last clue is removed from Jordan Perry: Flip this card over and resolve its text.

Time is money, and Mr. Perry has all the time in the world.
Rafał Hrynkiewicz
La Route de Carcosa #77. The Last King #17. 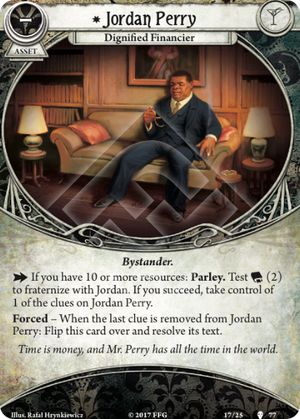 Remember that you "interviewed Jordan."

Flip this card back over to its Bystander asset side.

Mr. Perry is indifferent to your questions at first, but he grows more talkative as you express interest in his many investments. You learn that he has financed several productions of The King in Yellow in the past - not just tonight's performance. "It was the director, Mr. Engram, who convinced me to invest," he explains. "The first time I met him was in Paris, at a café in Montparnasse. What was the name?" He ruminates for some time, trying to remember. "Anyway, he convinced me that not every investment is about capital gain. One might consider me a fool to believe him, but I don't regret my decision. I've been financing his productions ever since." He smiles and pauses for some time, lost in memory. "L'agneau Perdu, that was the place. Yes, yes. What a night."
La Route de Carcosa #77. 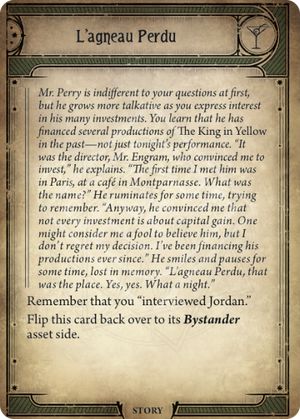