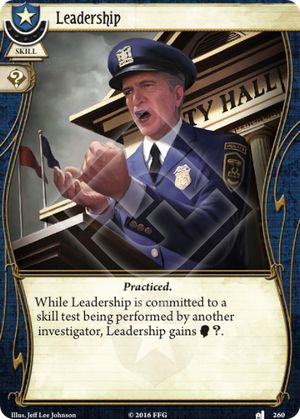 Leadership's inclusion in your deck is entirely dependant on your deck-building philosophy:

Using myself as an example of a deck-building methodology that will likely never take Leadership, I do not build campaign specific or party specific decks. Instead I build investigator specific decks; decks that are a complete package of synergy with themselves and the special ability of the investigator they are paired with, and adhere to a full-combat roll, a full-cluever roll, a full-support, or a half-and-half of the aforementioned rolls.

This philosophy, while good for forming multi-purpose decks, lacks the foresight to include cards like Leadership. On a purely theoretical level, two investigators committing Leadership to each-others test is strictly better than two investigators committing Unexpected Courage to their own test. In that train of thought, you trade away flexibility for max potential performance, probably at too high an exchange rate to be considered a good card.

But the extra icon reveals the main use of this card; as a safety net for your fellow investigators with low . If you know you'll be hanging out with a Finn Edwards, a Silas Marsh, or a similarly stated investigator, Leadership will very likely see play in most scenarios you draw it in. One way to think about it is you save them from having to commit two cards to get the equivalent amount of protection.

This is why, when building a party-specific deck, you should always consider Leadership. It's efficacy increases with the more players in your game, as you'll be in a location with another investigator more frequently. Alongside low individuals, mystics might also appreciate the extra boost, particularly Diana Stanley while she's still stockpiling cards underneath her.

And technically, there is ONE synergistic relationship with another card; Liquid Courage. Liquid Courage is very finicky, as the investigators that probably need the horror healing the most are also the ones that are most likely to fail the test that comes with it. Leadership can thus be used to get one good Liquid Courage test and heal 2 horror off of a 5-6 sanity investigator reliably. Not a bad investment, and right up Carolyn Fern's alley, though Leo Anderson can also take those two cards.

Lucaxiom · 3332
I disagree. Beyond deckbuilding philosophy, Leadership is a bad card. Steadfast and even Guts are usually preferable due to their higher level of versatility. If I’m Finn or Skids or any other vulnerable investigator, I’d rather my Guardian have more ways to kill things or heal the group instead of committing 3 Will to a test I will still probably fail anyway. There are so many better ways for these guys to deal with their low Will, and if Im playing one of them the last thing I want is for my fellow investigators to try and compensate for my low will. — StyxTBeuford · 12720 12/9/19
Lol, this card belongs in the last pages of the dusty binder where you keep the unplayable cards. Unfortunately deckbuilding sophistry can't change that — Alogon · 849 12/10/19
5

Compared to Unexpected Courage, you lose a Wild icon when you commit it to your own test, but you gain a Will icon when you commit it to another investigator's test. This is not really a great deal. One of the big strengths of Unexpected Courage is its great flexibility: it provides a pretty substantial benefit basically no matter what the game situation is. Leadership loses a lot of that. You're giving up 50% of the ability to boost yourself in exchange for the fairly modest upside of one extra Will icon. In the ideal situation, Leadership is a little bit better, but on average Unexpected Courage is going to be more useful.

So I wouldn't run this over Unexpected Courage, even in a high player count game. But of course, Unexpected Courage is a pretty good card, so "slightly worse Unexpected Courage" does not equal unplayable. You could viably run both in a 3 or 4 player game, if you could find the deck space for it. It would probably make the most sense to do so if you were playing alongside a Mystic and/or a second Guardian, as those are the classes that typically need Willpower boosts the most.

CaiusDrewart · 2741
Your explanation of this card is incorrect. If it is committed to another investigator's test, it will have 1 will and 2 wilds total. — Soloclue · 2355 3/3/18
You are absolutely right Soloclue. The card gains those icons - they are additional to its base icon. The OP is a classic misread of 'gain' as 'becomes', so easily done with these cards (done it plenty times myself). You have to read these things real carefully, read again then read once more to be sure! — smutcher357 · 92 3/20/18
@soloclue and @smutcher357: no, you both misread my review. When I said "you gain a Will icon when you commit it to another investigator's test", that was preceded by the clause "compared to unexpected courage." — CaiusDrewart · 2741 3/28/18
As in, committing Leadership to another investigator's test grants you one more Will icon than committing Unexpected Courage could have. I can see how my wording might have been confusing, but I think it's perfectly clear from the rest of the review that I properly understood the card. — CaiusDrewart · 2741 3/28/18
Honestly I might look at this card if they switched the benefits. 1Wil + Willpower if used selfishly and +1 Wild for allies. At least then youre coming out even on Willpower tests, sacrificing fexibility, but gain the raw power for allies. — Tsuruki23 · 2256 4/22/18
Leo + Finn + this for sure. — crymoricus · 225 1/11/19
3

This is a purely aesthetic review. This has to be one of the worst card images in the whole collection. A dumb police chief spouting nonsense about cracking down on crime (or whatever) at some city hall meeting doesn't really convey a sense of either cosmic horror or pulp adventure... and it's very dull looking too.