Revelation - You must either (choose one):

- Draw the top 2 cards of the encounter deck. 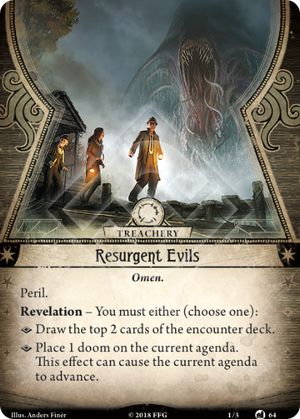 No reviews of this card? Preposterous!

This is a type of card I like seeing in AH LCG, and it almost makes me sad that it's stuck in its role as "a replacement encounter set in Return to Dunwich" instead of it being a straight up upgrade/replacement of Ancient Evils, one of the most annoying and omnipresent encounter sets of the entire game.

Ancient Evils just hits you with a Doom and possibly advances the Agenda, that's it. Such as it is, it's.. fine. It messes up the timer, it keeps you on your toes, but doesn't have any direct negative impact on you. However the lack of any agency in resolving it means that with higher player counts (or simply unfortunate clumping) sometimes the Agenda will just surge forward and sabotage the scenario which can feel a bit unsatisfying. Essex County Express is one of the more notorious examples of this (and possible direct inspiration for Resurgent Evils), since the breakneck pace of the scenario coupled with a relatively thin encounter deck means 3-4 players will in disproportionately large ratio of games have AE finish the scenario early without the players having any tools to stop this from happening.

Resurgent Evils is simply Ancient Evils with agency. You can stop that Doom being added.. at the cost of drawing two more Encounter cards. This doesn't take out the bite of Ancient Evils, but it enables players to dampen its impact. I've seen games where the choice of 2 Encounter cards saved the game, and I've seen games where it turned possible unfortunate timing of Doom into an absolute catastrophy and mayhem. But in any case, players are not passive sufferers but have active involvement in their fate, which makes a world of difference.

I highly suggest considering using this card whenever a scenario calls for Ancient Evils (and sooooo many of them are). Maybe the difficulty will be slightly lowered, but the payoff is definitely worth it.

ratnip · 13
My group shuffles these with ancient evils and adds 3 of that pile to the enc deck — Django · 2531 10/19/19
“It adds agency” and it also removes the ability for another player to block it with Ward of Protection 2 (or similar). — Death by Chocolate · 13 10/21/19
So I wouldn’t call it a ‘straight upgrade — Death by Chocolate · 13 10/21/19
I think thu — NarkasisBroon · 1 11/13/19
I think this, and its counterpart delusory evils, dramatically decrease the difficulty of most scenarios. The reason being that neither optional effect punishes you as much as a doom at the wrong moment. The fact that you know you can always avoid unexpected doom if you need to makes the game way less risky and less likely to kill you at unexpected moments. — NarkasisBroon · 1 11/13/19