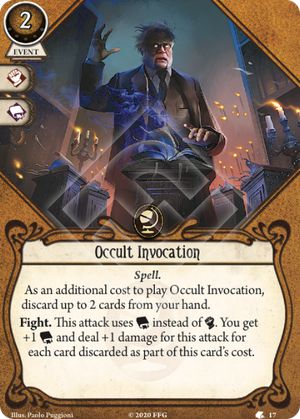 This is a brutal card.

To make this card work you need a worthwhile card-engine. Seekers got that in spades! Grisly Totem or Feed the Mind or Cryptic Research or whatever other card draw you like will find you this, fill your hand with chaff, and you discard the chaff for great benefit on this card.

The attack is accurate and powerful, you typically hit at +7 or better which is a golden number both in Standard and Hard to ensure that the hits land, 3 damage will remove the vast majority of threats, although it'll leave some of the most tricky opponents in the game alive.

Yes! Another way for Seekers to hand out a little hurt! They don''t want a lot, but with this and "I've got a plan!", you might be able to get by without potions or bows, especially if you are Ursula, who might well choose to just Dodge enemies except the few who would otherwise ruin her day. It's nice to be able to save the XP for other things.

"I've got a plan!" is the obvious comparison and unlike what I first thought when looking at it, I think it actually compares fairly well.

I've got a Plan has a slightly higher cost and does not give any bonus intellect. In many cases, you'd probably want to commit a card or two to your I've Got a Plan anyways to ensure you land the hit (missing a 3 cost event really hurts your tempo), so the cost of discarding cards for occult invocation isn't actually as bad it first seems.

This card actually gives you some flexibility to deal 1-3 damage, and choose how much you want to commit. The tradeoff is slightly lower max power (3 vs 4 damage, and commiting 2 cards to I've got a plan might give you up to +4 skill instead of 2 on occult invocation).

The other downside of I've got a Plan is you need a bunch of clues to even use it. Of course, holding even 3 clues isn't hard for a seeker, it's their primary role after all but sometimes the timing is just not right (e.g. right after advancing agenda), or you're playing solo and there are less clues in play, and specific scenarios don't have a lot of clues. Cards in your hand in contrast are always available and relevant for every scenario. In fact, drawing cards are seekers specialty.

I think you'll take this over I've got a Plan if...
-you're playing solo
-your deck has a decent draw engine
-you need to run a lower cost curve

You might lean more towards I've got a Plan if...
-you have high intellect / plan to stack intellect stats and don't need any other boosts
-your fighter might need a bit more help dealing damage vs bosses
-the cards in your deck are valuable in setting up a combo of sorts
-you can grab clues instantly at any time (e.g. working a hunch)

fates · 33
Nice review. I personally take this card now in every Seeker Deck instead of I've Got a Plan!. The problem with IvGaP is that it is sometimes not ready when you need it making it useless. Here, if you really need it, you always have 2 cards to trash, and a 3-damage event is pretty interesting. — Valentin1331 · 24757 4/25/22