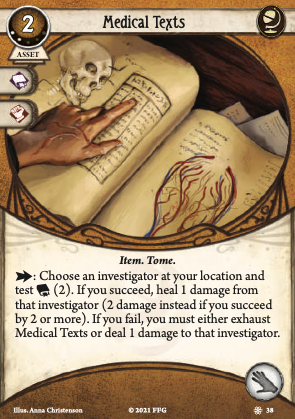 Healing or specifically getting soak out for its own sake tends to be anti-tempo and thus is relegated to investigators who can get special benefits (ex: Carolyn, Tommy), who desperately need extra effective health (Mark), or who can do special things to make it more efficient (Yorick). And maybe if you don't have anything better to do early campaign (say... Sister Mary in a 4 player game where she is sitting fairly hard in support).

However EOTE is amping up how good healing gets, and we are starting to get 'conditional' efficient heals that are worth using for their own sake to let decks run a bit more 'hot' on damage.

This is not one of them.

Firstly, on standard difficulty, you need to get to 6 lore on non-investigate lore tests to have good odds of actually healing 2. Otherwise this is just as inefficient in most characters as First Aid, probably the shining example of 'holy crud healing is generally bad in Arkham!'

6 investigate isn't too hard in pure seeker, but it isn't trivial either: you can do it, but seekers have a lot of ways to boost lore actively now and if your actively boosting lore to power this, it becomes more expensive and thus less action efficient. So this wants to be in a passive lore booster setup. That isn't too big a hurdle, but it should be noted your looking at spending XP on stuff like Death and not stuff like Higher Education.

Secondly, it is slow. A 'good' heal or soak card will heal something like 3 health in 1 card, 3 resources, 1 action, or just heal you 2 at the cost of only a card and an action. This card is healing you 2 HP for 2 resources, a card, and two actions, which is extremely expensive, but every heal after that becomes a 'good' heal assuming you always hit the mark. But that 1 action 2 resource tax is generally worth about 2 actions, meaning you need to heal with this 3 times for 2 HP to really make use of it as a healing effect at an efficient level, which isn't really ideal when you compare this to something like Earthly Serenity which is also a somewhat action intense heal that just lets you rocket up someone to 4 in 2 actions, instead of 3. Unless your healing a truly insane amount of HP, you generally won't heal enough to get more value out of this than the 'burst' healing or good soak assets that exist.

The main value of this card is that it is infinite healing. This isn't generally high value, but there are some things you can do with it. For example, with a guardian ally, this lets you convert a very simple lore test into 2 actionless damage with Beat Cop or 2 clues with Grete. A very basic lore test to 'bank' two clues in the future isn't terrible, especially if you are Daisy, because it lets you eat up 'in between' turns setting up allies, but this is still fairly questionable at this time. As we see more 'ally pain' engines, we might see this become a good way to support those allies, but for now its just really way too slow, even though it is basically a straight upgrade on first aid in the right deck.

Now obviously you can run it in 'actionless book' strategies like Daisy or Abigail but this doesn't make the actions really free: opportunity cost is a thing, and you almost always can be doing better stuff both with your free book actions, and with the action and resources it takes to draw and play the book, than gain some HP over a few turns, unless the scenario REALLY is trying to grind away at your team purely through HP damage to the point your literally struggling to survive without gaining 6+ HP a scenario, which is... unlikely.

Until seekers have good options to turn health into some sort of tempo advantage like guardians (and some rare mystics) can, this just doesn't make a ton of sense to run. While we may be seeing more healing from Arkham, Seeker is gunna have to keep its greedy little paws off yet another very broad design space and let the Survivors, Guardians, and Mystics have their fun.

But do keep an eye on this card, especially if our good friend Vincent Lee shows up some day. It is bad in the context of what it is good at being unnecessary right now. Not in the sense it isn't good at what it does.

EDIT: Curses, foiled again! This can't heal allies, relegating it pretty hard towards just being a good tool for you to 'pocket' a Mark with if you want to give them +2 to two tests and a card every round for an action, which can stack with encyclopedia. Not exactly terrible functionality, but this is still extremely niche without further 'pain on investigator' or 'reward for healing' support.

dezzmont · 69
This only heals investigators, so it can’t heal Beat Cop. — Death by Chocolate · 979 11/5/21
Also there’s better Hand assets like magnifying glass — Django · 3807 11/5/21
The magnifying glass serves a very different purpose than healing, so its more important to ask if this is good at its purpose. The lack of ally healing was a thing I missed, and definitely reduces the use scope of this to 'act as a super encyclopedia on a very gung ho Mark.' — dezzmont · 69 11/5/21
0

Finally the upgraded version of the healy book. Do I get it right that you can use it also when it is exhausted, but the next fail has to deal the damage? It would be more punishing if you could not use it while exhausted though. But two possible heals with no limited uses? That’s just broken! Love it

holandato · 2
Yes, you can use it while exhausted, but if you failed you would have to deal 1 damage. It's not that powerful, though; 1 action to heal 1 damage is quite expensive in terms of time. This was always the complaint with First Aid (0), though in the hands of Daisy, perhaps with Abigail Foreman, this starts to look quite nifty. — AndyB · 887 9/20/21
Your point is taken, AndyB, but most seekers can get — togetic271 · 3 9/26/21
Most seekers can succeed on a 4 intellect test without breaking a sweat, so I think that makes this a reliable way of healing 2 damage for one action, which is way better. — togetic271 · 3 9/26/21