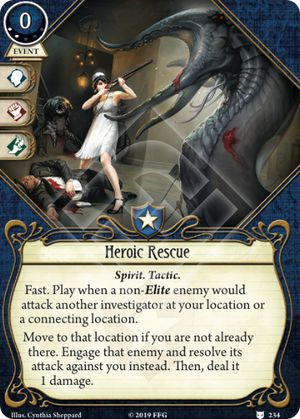 Heroic Rescue has historically had the issue that, despite your best attempts, your friends WILL run all over, thus the card can't be played due to distance. The pre-move on this upgrade solves that issue and the dropped cost is a useful addition in of itself.

DO remember that you can play Heroic Rescue in responce to an attack of opportunity, this means that when a friend wants to get away from an enemy all they gotta do is have you close enough to play this card, in so doing you intercept the enemy and the ally is free to progress the scenario safely. Absolutely awesome card for dedicated tanks.