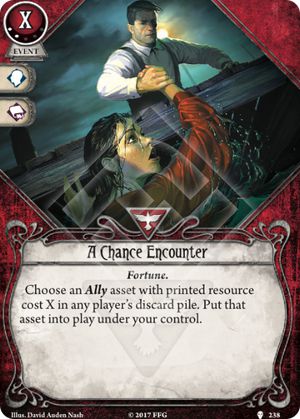 Neat effect for replaying and keeping those allies who have a trigger an then discard.

Stray Cats in particular become A LOT better with this card.

Oh, and Pete can bring Duke back from the dead with this. So that is pretty great.

On the other hand, it does require you to pay the cost of the ally, unlike the level 0 version.

So basically, it needs to target low cost, potentially expendable allies in order to justify the slot.

It will get better with more allies, but right now I would probably skip this outside of some weird party compositions.

Myriad · 1157
this one lets you keep the ally, so if you're just using it on allies who discard to use, there's no reason to spend the xp to upgrade to this version. the 0-xp version is far superior, only costing 1 and having the same icons (and of course costing no xp). only upgrade to this one if you have allies you want to keep around for a while for some important strategy. and Duke, like you said, it's a good way to make sure Pete isn't alone if he ends up taking too much horror/damage. — dr00 · 10 2/15/18
If Duke doesnt have a resource cost, can you use this card on him? — Fenrirgarm · 5 6/6/22
Duke actually costs 2. I think Last Chance does work on him. — Mogan · 1 9/28/22
1

This card is wonderful if you have the permanent “On Your Own“. Suddenly, you can have as many allies in your tableau as you can recur this card... and you play them at a two buck discount. With Wendy's amulet, you can play it, then get another shot it chance encounter from your discard pile. It’s a wonderful combo because it provides soak, and if nothing else, allies are wonderful at that.